Laptop 101 and What to Buy For College

Now that you are in college, you would need a new computer but with all the options available, you'll surely get overwhelmed. Each computer has a number of options so you'll need to look for the differences between each one of them and make your choice on the best one. We would be going through each of the items in the specification of a laptop and make our way through understanding what laptop is tailored to work for you.

The elephant in the room:

Gaming laptops are more of a personal choice. If you're going to be traveling a lot and have a laptop with you at all times (hackathons, conferences, etc...), a gaming laptop might not be the optimal choice. However, if you're willing to sacrifice portability due to the high specs of the laptop, then you're all good to go with a gaming one.

Now that is out of the way, Let’s get down to basics.

I am going a bit unconventional here and am going to talk about the storage even though I should be talking about the processor. Basically you need to look for an SSD option if you are getting a laptop in 2020 since SSDs have become better and better than HDDs, so much that HDDs can be almost considered obsolete. Always look for an SSD whichever seems to be the best NVMe might cost a bit more than SATA but it seems like a good deal for the money. How good an SSD is, is determined by the read/write speed and NVMe uses the PCIe port in our laptop which is very fast compared to SATA but any of this should work. You might be compelled to buy an HDD because you get 1TB of space but compared to an SSD it's just not worth it. Also, look for upgradability if you are buying a very less storage SSD option which fits into your budget. Look out for something called eMMC storage too. It's not meant for laptops and you are gonna lose upgradability if you choose this option, so don’t. So look out for:

Basically you are left with two options Intel and AMD you can choose whichever is available for the laptop that you choose but then there are subcategories.

Typically you should go for an i-series of processors because getting a Celeron or Pentium won't be just worth it in the long run even if it might be cheap because of the fact that processors are almost never upgradeable unless you are buying an Alienware which is very expensive and probably you won't be reading this article if money was not an issue :P.

Basically this is a very broad category and the difference between them cannot be explained as simply as I gave that heading since Intel naming scheme is weird.

There are mainly 4 things to look out in a CPU:

The more the core the more parallel processing that your computer can do. What that means is how much multitasking a processor can do.

Turbo-Boost: Every processor has a clock speed which is the rate at which a CPU can complete a processing cycle.

Turbo-Boost is Intel's proprietary technology which gives CPU’s the support of varying the clock speed depending on how much application demands it.

This has a tremendous effect on performance as well as the battery life of your laptop.

Cache-Size: This is like a private ram for the CPU. The more cache size, the more performance you would get out of your CPU. This is one of the small details people leave out which makes their computers slower compared to their competition.

When you look at a laptop you would also see the model number of the CPU: 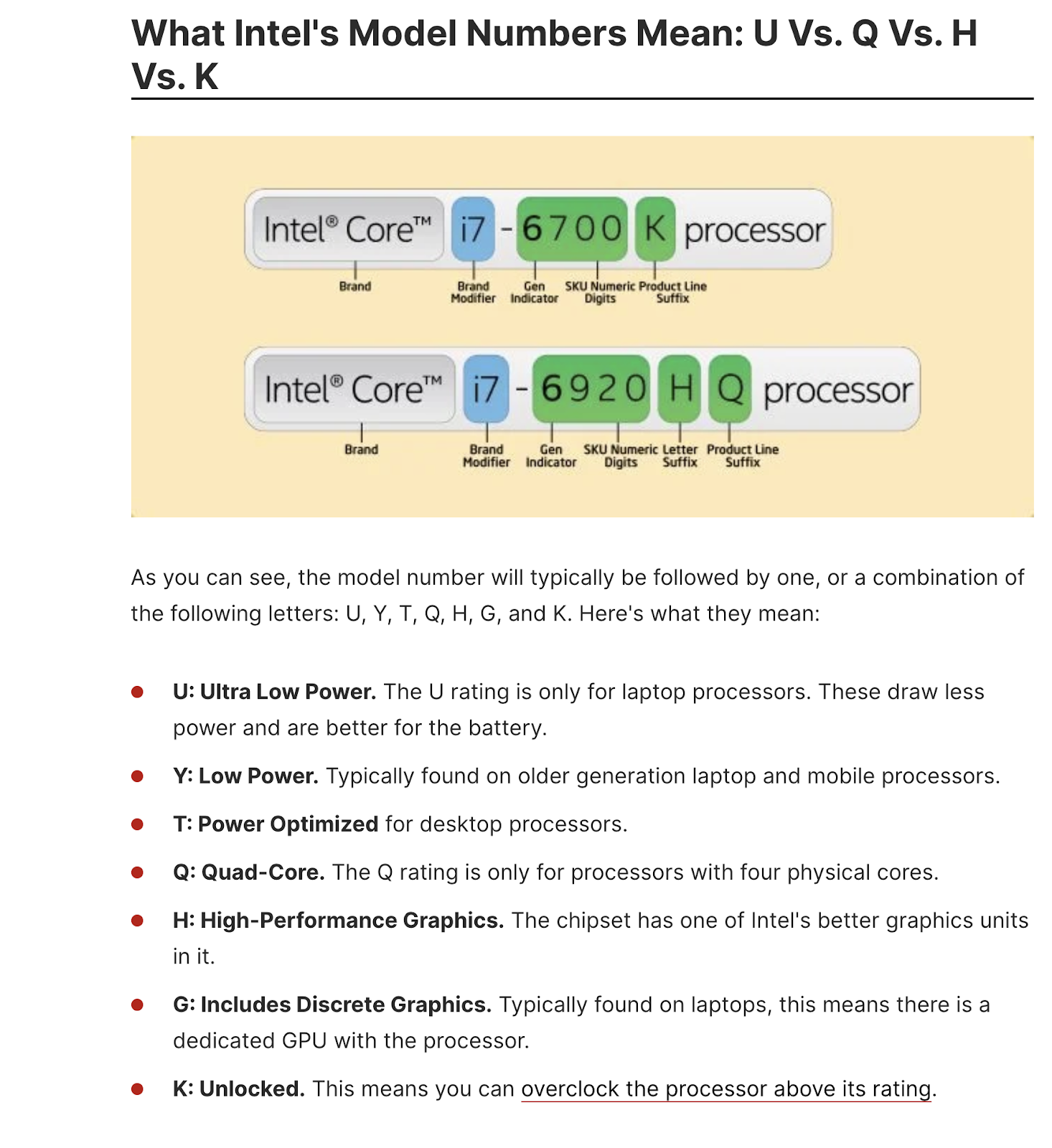 This is how you can read and understand what your processor has to offer and moreover you can google your model number to see the intel manual which would explain everything including the core count, hyperthreading, if turbo boost is available or not and the cache size.

Even though the terminologies change here the basic idea is almost similar,

This table will now make a lot of sense to you if you get the basic idea which was said in the above explanation for Intel CPUs.

The more the series goes up the better performance and price increases.

Ideally, look for a Ryzen 5 or 7 for your laptop.

As of now, every computer has ddr4 technology for ram so anything you find below this might be an old computer so consider going for a newer model. 8gb of ram is a good start and paired with that SSD should get you along just fine. If you are able to afford a higher ram then well and good. If you are going into things like android development or web development 8gb of ram is like the bare minimum because software like Android Studio is simply gonna use it up.

Most of the laptop comes with integrated graphics and most of the time this should be just fine as long as you are doing some kind of app/web development. But if you want to do some casual gaming and something more like running blender, video editing, or even training machine learning models (more on that later) consider getting a laptop with a dedicated graphics card. Most of the time you should be looking for an Nvidia GPU because most of the games are optimized for it as well as if you are planning on doing machine learning Nvidia has CUDA which is required for all of your machine learning libraries to take advantage of your GPU. Although, if you are too sure that you are going to be training models it is better that you don’t get a high-end GPU on your laptop because laptops are not made for such heavy model training and you would end up training your model in the cloud almost all the time. It is good to have some GPU power for inference as well as lightweight model training. Having said that, look for something about 2gb of dedicated GPU if you are planning on getting a graphics card and if you enjoy casual gaming a 4/6gb graphics would help you for your given budget. Don’t buy a high specification GPU for Machine Learning.

Now that you know the basics that you need to be looking on while buying a laptop you should just think of what exactly you need. I would like to stress the point of upgradability. Also if you are not much into gaming and like to make software and also like to explore Ios/Mac Os application development and you have the budget to buy a MacBook you should probably go with that choice. See what fits in your budget and think ahead of time. You are going to be spending most of your time with a laptop from now on since you are entering your professional life. If you are spending money on something that you use every day it can be thought of as an investment.